The Woodland Presbyterian Church was organized to the glory of Almighty  God on March 18, 1888. The original petition to the Puget Sound  Presbytery was signed by Woodland pioneers C.C. Bozorth, R.R. Bozorth,  E.V. Conrad, W.R. Bozorth, S.J. Bozorth, A.L. Bozorth, C.A. Bozorth,  S.W.F. Browning, C.L. Klady, Bella Klady, Jas. Copeland, Frank E.  Copeland, E.A. Bedford and L.E. Copeland. A minister was shared for a  time with a congregation at Ridgefield. There were ten original members  that met in the school. In May of 1889 the Articles of Incorporation  were filed.

In the summer of 1889, the first church building was erected. By early standards, it was a fine structure with steep roof, Gothic stained glass windows and a tall steeple that held a bell. It was lighted with kerosene lamps placed on wall brackets. 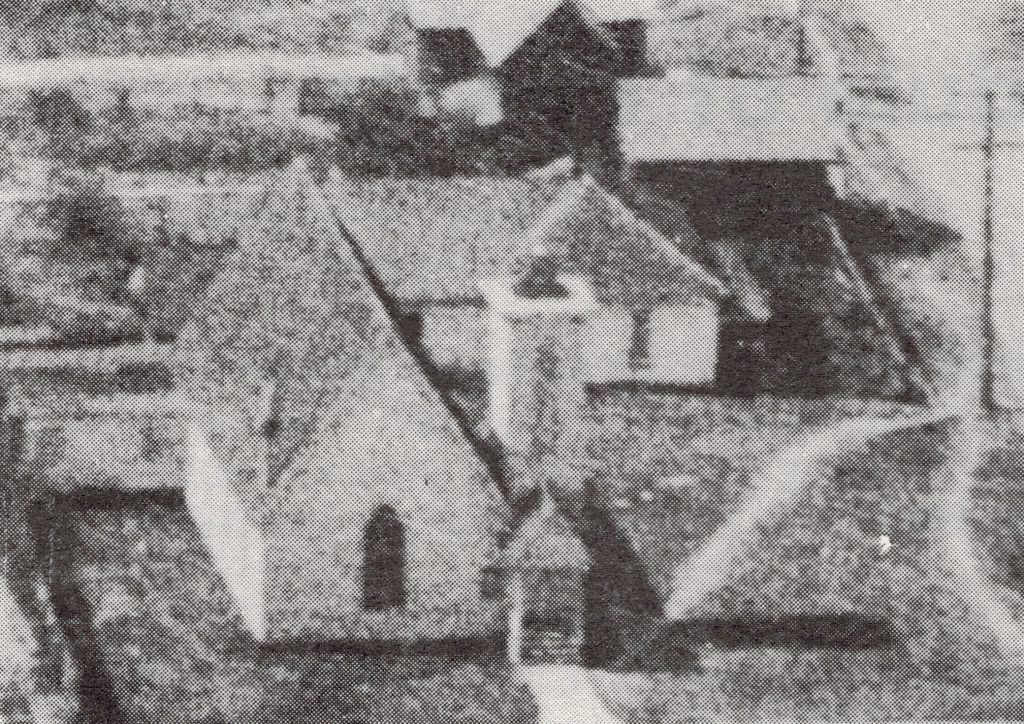 In 1926, a new building was erected at the present location and a new sanctuary added in 1958. A Christian Education wing was added in 1967. This wing includes a nursery, classrooms, kitchen, and fellowship hall. 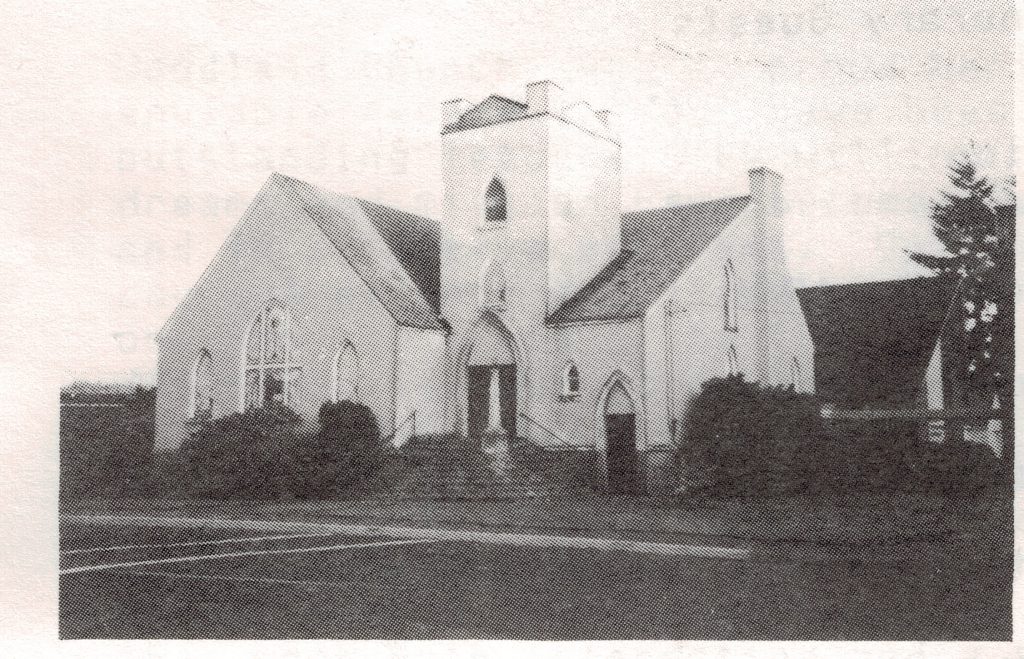 In 1986, our most recent construction project began.  This project added our new Narthex, chapel, library, and offices.  The beautiful stained glass windows once present in the old sanctuary were releaded and adorn this addition.

On June 7, 2016 our church moved from the PCUSA denomination to the Evangelical Presbyterian Church denomination (EPC).

Why did we change denominations and what was the process?

We changed denominations due to several recent decisions by the PCUSA denomination, which we as a congregation believe are in opposition to Biblical teachings regarding marriage and homosexuality.  Specifically, in 2012 PCUSA authorized the ordination of homosexual pastors. In 2014 they authorized pastors to marry those of the same sex, and redefined marriage as between any two persons regardless of sex.  These actions by PCUSA set in motion actions by our local church elected governing body, the “session”, to begin the process of finding a new denomination more compatible with our Biblical beliefs.

On July 8, 2014 our session voted to begin the formal process of separation from PCUSA. We were required to follow the PCUSA policies and procedures to leave. There were numerous required meetings with PCUSA representatives throughout the process. During the first phase of the process, we as a congregation had to select the new denomination we wished to join, and then hold a congregational meeting to vote on leaving. To leave PCUSA a congregation must vote at least 75% YES to leave. We voted 85% YES to leave.

We chose the EPC denomination after careful study of the governing structure and beliefs held by the denomination.  The EPC is the third largest Presbyterian denomination in the USA. It is committed to missionary outreach, holds closely to the Biblical definition of marriage, and does not ordain homosexual pastors or authorize marriage of persons of the same sex. The EPC believes that the Bible is the divinely inspired inerrant word of God. The Bible, and the Westminster Confession of Faith and Catechisms comprise their doctrine.

The final step in the process of leaving PCUSA was to negotiate a property financial settlement. PCUSA has a legal trust relationship with all PCUSA churches, which means PCUSA churches don’t own their church property. To get ownership title to our church property our financial settlement to PCUSA was just under $70,000. One of the beliefs of the EPC denomination is that local churches should own their own church property.  Another key governing policy is that at all voting decision making meetings of the denomination there must be two lay persons voting for each pastor voting.

Since we have been without a permanent pastor for nearly three years, our Pastor Search Committee is in the process of interviewing candidates at this time. We know that God will send us just the person of His choice to lead us. We are excited about the future of Woodland Presbyterian Church, as we serve God in our community and around the World.

After meeting for almost a year and interviewing many candidates, the Pastor Search Committee, by a unanimous 9-0 vote, voted on October 25, 2016, to call Kevin Leach as our new pastor.  Then, on November 2nd, 2016, the congregation voted to call Kevin.  Again, the vote was unanimous, 51-0.  There was a very strong consensus that not only was Kevin the best candidate for Woodland Presbyterian, but God had sovereignly called him.  He started his ministry here at WPC on December 1, 2016.

Kevin is originally from Arlington, Washington.  He is a graduate of Seattle Pacific University and Gordon Conwell Seminary.  He was previously a pastor for 16 years at a Congregational Church in West Newbury, MA.  He is married to Cindy.

Pastor Kevin brings experience, integrity, great preaching skills, and a deep concern for the community outreach and discipleship.  We are blessed and honored to have Kevin and Cindy.

“Woodland Presbyterian Church has a proud heritage, a noble history, and an enviable record.  It has been inspired by great pastors, by outstanding leaders, by willing and dedicated followers.  Our dreams and mission have become realities in functional facilities and in effective programs.  God has truly blessed the vision and courage of our ancestors.  Their efforts have been blessed by (over) one-hundred years of faithful service and mission in the name of Jesus Christ, our Lord.”  – Rev. Ray Moody 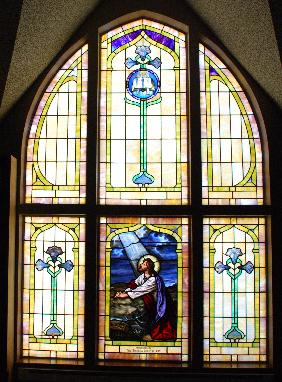 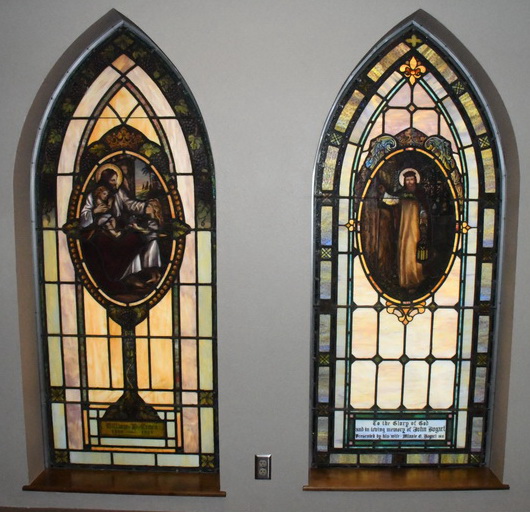 The large stained glass window above was purchased by the women in the Eulogia Bible Class Which began its thirty-six year history in the church in 1919. 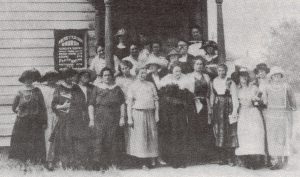